The simplest microorganisms are species of Testacea. They have an important function in natural communities. Protozoa are widespread in forest ecosystems and are a constant component of soil microfauna.

These organisms mineralize organic matter and decompose cellulose and lignin, making it available to other animals and plants. As a matter of fact, they are involved in the transformation of organic materials into humus in the upper soil layers (Mazei, Tsyganov, 2006; Bulatova, 2010).

The number and variety of amoebae species depends on the structure of the stand in forests. The largest number of protozoa is located in the zone of the rhizosphere of trees, because there is a contact of microorganisms with roots of the plant in the soil.

For example, scientists discovered 9 species of Testacea (members of the Cyclopyxis, Centropyxis and Nebela genera) close to spruce and pine roots in the forest soil of West Siberia. There are all species in the undercrown zone of the pine. The maximum number of dominant species Nebela collaris were observed at a distance of 20-60 centimeters from the root system of both trees. This may be due to the fact that the trees can has an underdeveloped main root and only lateral roots absorb water and minerals (Kulyukina et al., 2016).

According to the scientific literature data, there is big variety of protozoa in pine forests, among eurybionts (kinds of the Cyclopyxis and Trinema genera). The species variety of testate amoebae is due to the great heterogeneity of the vegetation cover, where there are areas with coniferous litter and grass-shrub and moss-lichen layers. It was discovered that: 1) More Testacea of Phryganella and Cyclopyxis genera in the moss-lichen cover of pine forests. 2) More species of Centropyxis were detected in soil-lichen areas (Bulatova, 2010; Blinokhvatova et al., 2011).

There are several studies on the variety of Rhizopoda on the territory of Karelia, which were carried out in highly swampy areas of pine and sedge-sphagnum forests (Mazei, Kabanov, 2008; Malysheva, Mazei, 2013). The authors noted 3 ecological groups of protozoan communities in the process of research in the sedge-sphagnum forest of the northern taiga: xerophiles, mesophiles, and hygrophils. Furthermore, it was suggested that in the distribution of testate amoebae over the area, other environmental factors, like humidity, are also important (Mazei, Kabanov, 2008).

There are few scientific works on protozoa in pine forests of Karelia, therefore the aim of this work is to study the Testacea variety in pine biogeocenoses of the Republic. The research sites are located on the territory of the Karelia Republic in the Northwestern Federal District of Russia.

The Kivach reserve is a protected state zone with a special nature, where scientific research works are carried out annually. Most of the reserve (84%) is covered with forest, 41% of which is pine forests. Cowberry and blueberry pine forests are formed on the slopes of the hills, where the soil cover is an Ferric Podzols (Bakhmet, 2017). These soils contain the greatest amount of humus in mineral horizons, the value of which decreases with depth. It provides high density of colonization by the simplest organisms in the upper soil layers. The pH indicates a highly acidic reaction of podzols especially in the upper horizons (Fedorets et al., 2006).

The second research site is the Botanical garden. That place was formed on the slopes of a relict volcano. There are sandy loam burozems in the Oxalis Pine Forest. These soils differ from the others by having a humus horizon, where substances are humified. Soils are highly acidic too especially in litter (Krasilnikov, Platonova, 2001).

The species variety of soil testate amoebae (Rhizopoda, Testacea) was studied in the pine biogeocenoses of the PetrSU Botanical Garden (Oxalis Pine Forest) and the Kivach Reserve (Cowberry Pine Forest) in the period from 2019 to 2020.

The depth of sampling of the soil samples was less than 20 cm, which allowed us to study the species and quantitative composition of microorganisms in the upper mineral horizons.

To identify seasonal dynamics, soils from one site have been studied monthly from June to October for a two-year period.

We used the method of A.A. Rakhleeva, G.A. Korganova (2005) for species identification of soil testate amoebae. Exact 5 grams of the substrate were placed in a flask, poured with water (150―200 ml) and left for several hours to soak the soil particles. Then the suspension was shaking during 10 minutes and filtered through the sieve with 0.8 mm holes into large beakers. The suspension was settled for 2 hours, the upper liquid was drained, the filtrate residue was transferred to a graduated container and allowed to settle again. Excess liquid was drained and 10 ml left. The suspension was colored with carmine and fixed with formalin for 24 hours. Living cells of protozoa and cysts were coloured in pink, which allowed us to identify active organisms and empty shells. More than 10 preparations were reviewed from each sample.

Testate amoebae were counted in aqueous suspensions. A drop of the solution (~ 45μl) was placed on a glass slide using a Pasteur pipette. Microscopy of the preparations was performed using Axio Scope A1 and Motic microscope magnifications of 45x and 60x. We studied more than 3000 preparations in total.

The discussion of the results

The Pearson index (χ2) was used to assess the credibility differences in species abundance, confinement to biotope. Significant differences were considered under the following conditions: if p

Table. Occurrence of the soil testate amoebae (Testacea) in research biotopes. The Pearson index values obtained (χ 2) and the significance level values obtained (p) when the number of degrees of freedom df = 1. 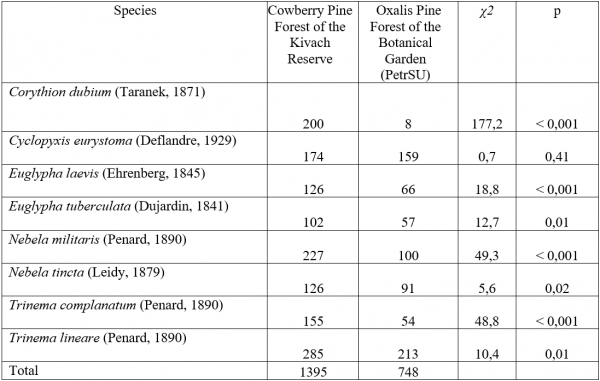 In the studied pine forests, 28 species belonging to 14 genera were observed.

The greatest variety of spotted species is in the Pine Forest of the Kivach Reserve. There are such dominants as Trinema lineare, Corithion dubium, Nebela militaris, Euglypha strigosa glabra (Fig. 2A) in this biogeocenosis.

The Trinema lineare includes little elongated shell. We can distinguish these species of amoebae by the round mouth is 10 µm in diameter. Its shell is small in size, 16-35 µm in length, 7-17 µm in width.

Corithion dubium, which was located in every Cowberry Pine Forest soil sample, has an ovoid shell consisting of very small oval plates that overlap. Its sizes are average: 33-43 µm in length; 25 µm in width.

Trinema lineare and Nebela militaris were detected in the biotope samples of the Botanical Garden, as well as in the Forest of the Kivach Nature Reserve. In addition, Cyclopyxis eurystoma became the dominant species in the Oxalis Pine Forest.

The Cyclopyxis eurystoma includes a middle half-round shell in a hemispherical profile, 30-80 μm in diameter and 30-50 μm in height. Its mouth is large (22-34 μm in diameter). Mineral components of shell are big and visible well enough.

The shell of Nebela tincta, which has been identified in large numbers as well, is big, pear-shaped or ovoid. The color range is different: from light yellow to colorless. The shell is 75–95 µm in length, 55–64 μm in width, the mouth is up to 30 µm in width (Fig. 2C).

An interesting specie is Trigonopyxis arcula. It is located in the soil of the Cowberry Pine Forest, the mouth of which is of an irregular shape, resembling a triangle. The shell is medium, hemispherical. Coating of flat grains of sand or detritus. Size: 65 μm in height, 64 µm in width (Fig. 2D).