The Russian Arctic provides enormous resources: there are the largest deposits of coal, gold, rare metals, as well as huge reserves of aquatic biological resources, hydropower, forest, recreational and other natural resources. Obviously, they should become the basis for successful social and economic development and well-being of Russia. 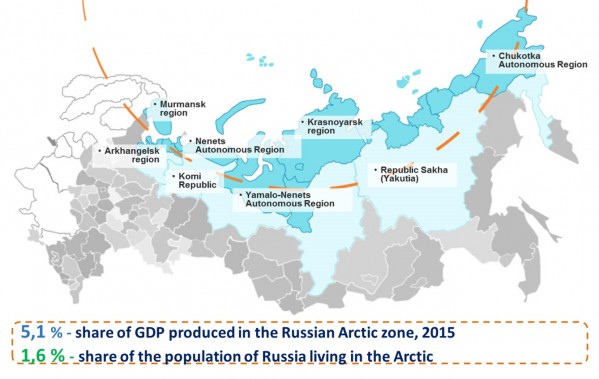 The structure of the economy of the Russian Arctic differs from the average Russian. The economy of the Arctic regions is directed to the extraction of minerals, their processing and transportation. In all Russian Arctic regions, the area «Mining» prevails, which constitutes one third of the Gross Regional Product (GRP) of the macroregion. The identification of development priorities allows to take into account the tendencies of development of economic structures for the future, which should become a reference point for the training system in order to meet the actual request from the economy.

The Russian Arctic has sufficient labor potential. Today in the Russian Arctic permanently live 2.4 million people, which is more than in the arctic zone of 7 other Arctic countries of the world. This is dominated by the urban population, which is concentrated near the main infrastructure facilities.

It is an open secret that the Arctic is a sparsely populated area. Over the past 10 years its population has decreased by 5,6%. Natural population increase in this region does not compensate the population outflow (Figure 2).

The population structure is characterized by a higher share of active population: the average value in the Arctic regions is 71.8% against 69.5% for whole Russia. The level of employment in AZ RF also exceeds the national average.

Another positive trend in formation of the labour potential of the Arctic is the predominance of younger population in comparison with Russia as a whole, as well as higher share of working-age population in the total population.

The labor market of the Russian Arctic zone is characterized by a stable equilibrium: staff turnover  is two times less than the average for Russia. Severe climatic conditions, labor intensity of tasks and remoteness of workplaces from the center stipulate the attraction of workers by the shift method. The role of the shift work method is significant in covering the staffing needs of the Russian Arctic and amounts to 20-40% of the average annual number of employees. It is noteworthy that at the enterprises of the oil industry the share of workers on a rotational basis reaches 90-100%. The turnover of personnel in the Arctic zone is 2 times less than the average for Russia. These data were obtained from the results of surveys conducted by the leading employers of the Arctic zone in 2015. Nevertheless, the role of local workers living on the territory of the Russian Arctic zone is very important for supporting and successfully developing the productive and social spheres.

On behalf of the Ministry of Education and Science of the Russian Federation, we assessed the need for the economy of the Russian Arctic zone in qualified personnel. The basis for workforce needs forecasting of the economy is a combined approach of macroeconomic forecasting methodology and employers surveys. The peculiarity of the method consists in calculating the predicted values in accordance with the strategic planning documents for each subject of the Russian Arctic zone and the macroregion as a whole. Strategies for the development of industries and industrial clusters are also taken into account.

According to the forecast calculations for the period until 2020, the annual additional demand of the economy of the Russian Arctic zone in the frames with secondary education is stable and amounts to about 25 thousand people annually. In particular, about 2 thousand people are needed annually to implement major investment projects, which is about 8% of the total personnel requirements of the Russian Arctic. Graduates of the secondary education system cover less than half of the additional staffing requirements in the regions. The rest of the staffing requirement can be covered by retraining unemployed citizens and attracting interregional and foreign labor migrants. In general, the shortage of labor resources is more associated with the professional qualification mismatch in the distribution of cadres in the macroregion [2,3,4].

The study carried out a comparative analysis of the lists of popular occupations and the criteria for the demand for occupations in the Arctic zone of Russia. The main source of information is the statistics on the vacancies of the Employment Service. In 2015, the Employment Service announced vacancies for 2040 occupations. Of these, 205 occupations with the largest number of vacancies were selected. 62% of these professions are in the top 50 demanded occupations in the labor market of Russia. Among these occupations is a locksmith, an oil and gas production operator, a driller, a geologist, a programmer, a turner, a welder, a milling cutter, an electrical installer, carpenters and others [5].

The lack of information on the labor market in the Arctic makes it difficult to effectively use the labor potential of the Russian Arctic. The above mentioned problem can be solved with the help of the Conceptual approach of the International Labor Organization (ILO) and the European Training Foundation (ETF) on “early warning system” development. It includes collecting, analysing and disseminating information about the past, present, and future of the labor market. In Russia, a so called "transparent labour market information environment" approach is widely used [6].

To solve this problem, the Budget Monitoring Centre with the support of the Ministry of Education and Science of Russia implemented the website «Staffing for the Development of the Arctic Zone of the Russian Federation». The portal implements various infographic tools. Let's consider some of them.

«Occupational barometer», developed in Finland and adopted in Russia, shows the lists and geography of high demand occupations by regions. This tool helps to analyze the labour market and to plan vocational training and retraining [7].

«Occupation chart» visually presents key features of occupations of high demand, including definition, average salary, professional qualities, necessary knowledge and skill and other categories (Figure 3). The advantage of developed «Оccupation chart» is that information is presented using infographics in an attractive and «user-friendly» way, which is especially important when working with younger generation (Figure 4) [8]. 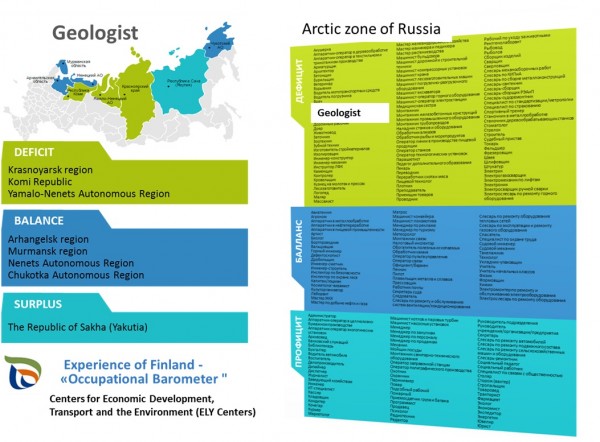 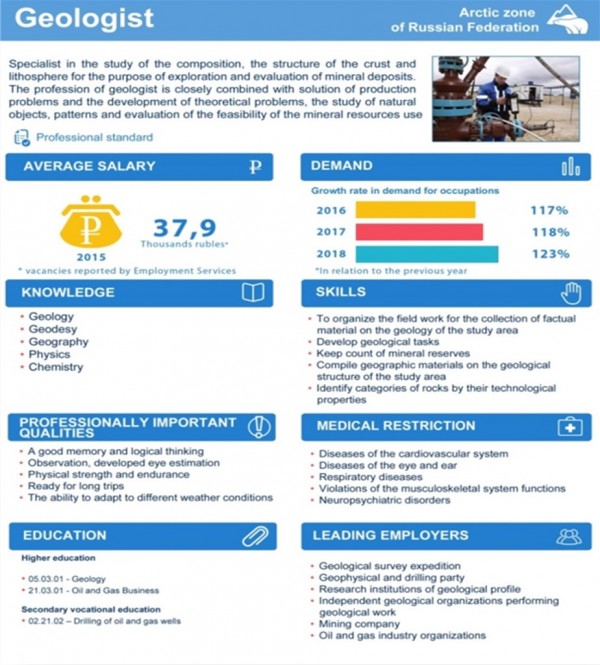 We suggested a comprehensive approach to solve the problem of the Russian Arctic Zone’s staffing needs. The main solution is dissemination of information on labour market situation for target groups’ awareness.

2. Stepus I. Strategic development of the economy of the Arctic macroregion and its supply with personnel with secondary vocational education // Regional economy: theory and practice. - 2016. - No. 11. - P. 66-80.

3. Sigova SV, Stepus I.S. Staffing of priorities for the development of the Arctic zone of Russia - the contribution of the higher education system // University management: practice and analysis. - 2015 - No. 5 - C. 19-29.

5. Shabaeva SV, Fedorova EA, Stepus I.S. Demanded professions in the Arctic zone of Russia as a reflection of the priorities for the development of the macro-region's economy // Economics and management: problems, solutions. - 2016. - № 7 (Volume 1). - P. 104-117.